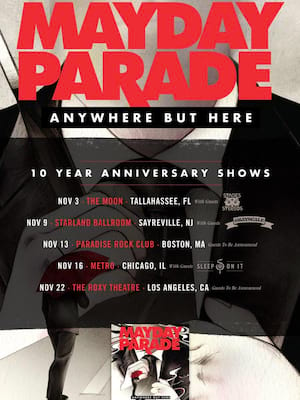 It's very hard to stand out in pop punk, and few bands know this as much as Mayday Parade; a group that has both been able to break the monotony of much of the genre and fall back into it as easily.

Formed from the ashes of Kid Named Chicago and Defining Moment, two celebrated Tallahassee bands, Mayday Parade's electric fusion of emo, pop and indie rock earned them a gold certification upon the release of their debut album 'A Lesson In Romantics'. Thirteen years and five albums later, the sextet are in a celebratory mood, with this winter seeing them take to the road on the 'Anywhere But Here' tour, in support of the record's 10th anniversary.

Positioning themselves as a staple on the pop-punk scene thanks to their relatable melancholy and emotional depth, Mayday Parade connects with their fans by making music that's from the heart. As such, the rock show veterans' live concerts are cathartic affairs where the audience lets loose and sings every lovelorn lyric at the top of their lungs. Expect to hear the album in its full live glory!

Scott,: “Why all the covers”

I love Mayday Parade music, and to be honest I was supremely disappointed... more

Sound good to you? Share this page on social media and let your friends know about Mayday Parade at Warsaw.