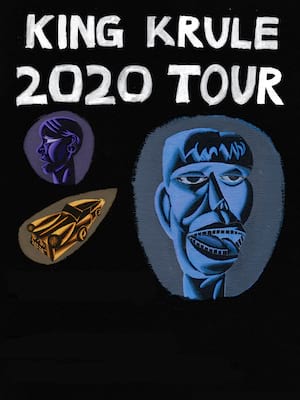 The producer born Archy Marshall crafted The OOZ to be alien and timeless. It is the richest and most immersive album the London singer-songwriter has made yet, under any name.

Having created music under the names Zoo Kid, DJ JD Sports, Edgar The Beatmaker and Edgar The Breathtaker, London singer-songwriter Archy Marshall fully embraced the moniker King Krule and released his third studio album The Ooz in late 2017 to much critical acclaim. Don't miss the millennial's answer to David Bowie's Space Oddity as he returns to US shores in 2020 a move that surely heralds the arrival of new music sometime soon!

Blending elements of punk with jazz, hip hop, darkwave, Bossanova and trip-hop, King Krule has produced a surreal, timeless album rich with melody, angular beats, and his trademark meandering, guitar lines. His distinctive, raw-throated vocals cut and lyrical contemplations through the swathes of haze, darkness discord to make sense of the musical madness that ensues onstage, making for a beguiling yet electric live show.

Sound good to you? Share this page on social media and let your friends know about King Krule at Kings Theatre.