Sorry! You missed Uncle Acid and The Deadbeats at Brooklyn Steel 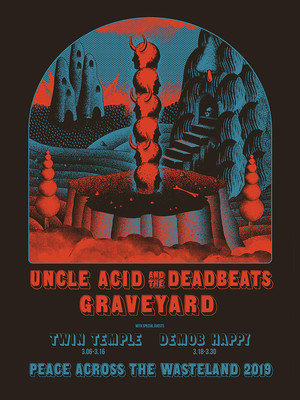 Uncle Acid and The Deadbeats

Don't miss your chance to see these legends live!

Why See Uncle Acid and The Deadbeats?

Peace Across The Wasteland

After a long three years, Uncle Acid and the Deadbeats are back on the road in 2019! Teaming up with fellow rockers, Graveyard, the two bands join forces to bring you an epic night of headbanging tunes. On their 'Peace Across The Wasteland' tour, the English four-piece make their hotly anticipated return with their brand new album 'Wasteland'.

With both bands having released new music this year (Uncle Acid's Wasteland and Graveyard's Peace) this is certainly one concert that won't be lacking hits! With ten albums combined, you can expect to hear hits like 'Mind Crawler', 'Crystal Spiders' and 'Dead Eyes of London' in one fantastic evening of moshing rock!

Uncle Acid and the Deadbeats

Amazing job! Uncle Acid and the Deadbeats brought such life and energy... more

Sound good to you? Share this page on social media and let your friends know about Uncle Acid and The Deadbeats at Brooklyn Steel.