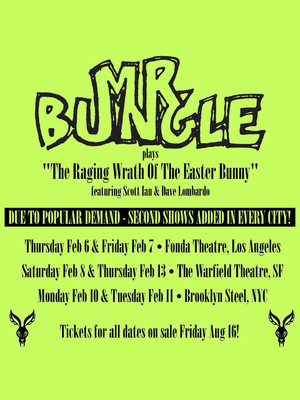 The band without a genre is back and returning to the demo that started it all!

Fittingly formed in the small Californian town of Eureka, boundary-pushing pop rock experimentalists Mr. Bungle took their moniker from a cheesy children's educational film, which makes quite a lot of sense since the outfit's sonic calling card is difficult to define... With the 1986 release of their first demo The Raging Wrath of the Easter Bunny and subsequent self-titled debut album in 1991, Mr. Bungle made it clear that they were genreless, fusing metal, jazz, ska, funk, techno, punk and noise rock into an avant-garde smorgasbord.

Quickly becoming cult heroes thanks to outrageous live shows where band members would wear masks to hide their identities and perform surprising covers like the Star Wars theme, Mr. Bungle continued to break rules and take names, even whilst their lead singer Mike Patton simultaneously performed as frontman of Faith No More. Since the announcement of a permanent hiatus in 2004, the band are regrouping and hitting the road to perform The Raging Wrath of the Easter Bunny in its entirety during a special reunion tour. Core members Patton, Trey Spruance and Trevor Dunn will be joined by special guests Scott Ian and Dave Lombardo.

Sound good to you? Share this page on social media and let your friends know about Mr. Bungle at Brooklyn Steel.