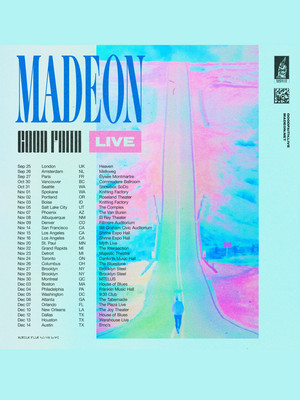 Madeon's mixture of colorful, sample-heavy EDM and its attending uplifting lilt made for the perfect feel-good vibe

Hailing from Nantes, France, DJ Madeon AKA Hugo Leclercq is fast becoming an internationally recognised force for dance-floor-filling bangers. Thanks to his artful blend of ebullient nu-disco (a 21st century fascination with 70s and 80s disco), chic french house beats and feel good, danceable pop hooks, he quickly rose through the ranks - first releasing remixes and mashups, then producing for the likes of Lady Gaga, Muse and Elli Goulding before touring and releasing under his own steam.

Following the hotly anticipated release of his sophomore album Good Faith, Madeon ushers in a new era with a mammoth North American tour in the fall of 2019. Featuring brand new songs like album singles Dream Dream Dream and All My Friends, Good Faith is filled with joy and hope for the future, and is a summery, groove-heavy and funk-tinged record sure to solidify the artist's status as a force to be reckoned with in dance music today.

Seen Madeon? Loved it? Hated it?

Sound good to you? Share this page on social media and let your friends know about Madeon at Brooklyn Steel.