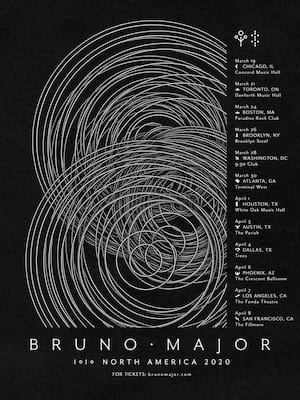 With his roomy falsetto and pulpy guitar riffs, Major knows how to surface deep-rooted emotions in his listener

Discovering his passion for guitar at the tender age of 15, London singer songwriter Bruno Major honed his chops in the city's jazz jams and pubs and it wasn't long before the six-stringed virtuoso appeared as a session musician for the likes of R&B legend Lalah Hathaway, amongst others. After a major label record deal saw the young up-and-comer record an album with Ethan Johns, yet did not solidify into the type of record he wanted to make, Major went back to the drawing board and released A Song For Every Moon independently in late 2017.

An ambitious project, the album comprised of songs written, recorded, produced and released each month, and not only did the project gather much attention, it announced a fresh new talent who wasn't afraid to take chances with or without industry backing. Soulful, blissful and deeply romantic, Major's soaring songcraft marks him out as a modern balladeer in the tradition of James Blake, Tom Misch and a latter-day Leonard Cohen.

Sound good to you? Share this page on social media and let your friends know about Bruno Major at Brooklyn Steel.