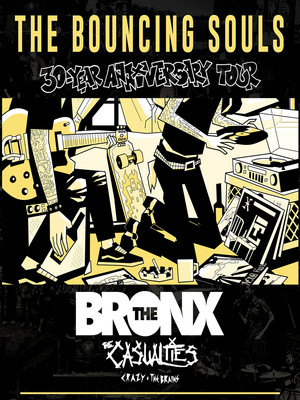 But thirty years down a road which has taken them from a small town in New Jersey, to the earphones and playlists of music lovers the world over, they show no signs of fatigue, no flakes of rust and absolutely no intention of turning down the volume.

New Jersey punk rockers Bouncing Souls are one of the rare bands in the rock scene to make it to 30 years. Especially one that applies a D.I.Y approach to their music making and have seen success within the help of major labels and corporate radio. In celebration of this great achievement, the band will head on a 30-year anniversary tour, kicking off in Denver.

Last month, the band released their Crucial Moments EP which is a 6-song project described as showcasing "the journey the band have been on over the past three decades" by Discovered Magazine. They also praised the EP for contributing to "a scene they helped shape."

Frontman Greg Attonito explains how the band started by playing "basements, bars, parties and clubs" and because of that "the live show has remained the essence of The Bouncing Souls." As the stage is where they feel most at home, this tour is set to be a lively and memorable experience!

Sound good to you? Share this page on social media and let your friends know about Bouncing Souls at Brooklyn Steel.